The Road to Freedom Runs Through the Executive

The cry for greater democracy in the world is appealing, but our biggest challenge remains the 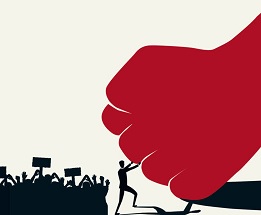 ancient problem of too much power in the hands of the executive branch of government.

In a world witnessing more muscular autocracies, there is a temptation to resort to simple demands for greater democracy. To achieve this, the thinking goes that we should simply expand democratic institutions. However, when we dig into the structure of government, we often find that most of our political ills begin in the executive branch of government, and not necessarily the structures of democratic choice.

What Ukraine faces is another historic example of this phenomenon.

When, more than 2,000 years ago, humanity tried out its first large-scale experiment in participatory democracy in ancient Athens, the result was a flourishing of free thought, from philosophy to astronomy, that continues to influence and astound the world today. But it didn’t escape the Athenians that the system had its flaws.

When the approximately 5,000 eligible voters gathered on the Pnyx, a hill in central Athens, to express their views, they frequently fell prey to demagogues. They sometimes made rash decisions to go to war and even consigned one of their brightest, the philosopher Socrates, to death for being impious and corrupting the minds of the young.

In his remarkable book “The Politics,” Aristotle brooded on this problem of the “rule of the many” and their tendency towards mob behaviour – crowds are passionate and unpredictable things. Indeed, in Aristotle’s day, democracy had a bad name. But Aristotle didn’t think the alternatives were much better.

What was humanity to do?

Aristotle saw the best form of government as being one that combines various aspects, with each one checking and balancing the other – essentially a mixed constitution.

His insights were not lost on the Romans, who tried to create a republic that took him up on his ideas. As Greek historian, Polybius observed: “To a considerable extent, then, each of the three components of the Roman constitution can harm or help the other two.”

Polybius was referring to the involvement of the people in voting for laws in: i) their assemblies (the democratic element); ii) the branch that oversaw law-making (the Senate, or the rule of the few); and iii) those who were the top rulers (the Consuls, or the monarchical rule-of-the-one element).

In this scheme of government, democracy is important for engaging the people in decision-making, but of equal or even greater importance is to achieve a balance between the different branches of government.

The U.K. is a case in point. In its legislature, the House of Commons (the lower house of parliament) is the democratic element as Aristotle would have had it, voted for by the people. The House of Lords (the upper house of parliament) is the aristocratic element, although today it is not populated solely by ancient aristocratic families. Then, at the top of the mound, is the executive branch of government, the rule of the one, or the monarchical aspect of our government.

Britain is a little strange because it technically has two heads: the Prime Minister (leader of the political party with the most votes in the most recent general election); and the monarchy itself, which has been largely stripped of its ancient powers. So, Britain has the rule of the one, but twice.

Even the U.S., a country that many people take pride in calling democratic, is not strictly just a democracy. In fact, the founding fathers went to great pains to avoid creating a democracy and were fully versed in the criticisms of the mob-like tendencies of democratic rule noticed by the ancients.

Ukraine represents another mode of a mixed constitution. The one-chamber parliament (Verkhovna Rada) would correspond to the democratic element alongside the rule of the one (the executive). As the president is elected by popular vote, it is a rule of one wrapped up into a democratic element. Ukraine does not have a body that would obviously correspond to Aristotle’s aristocratic element, although the Cabinet of Ministers might come closest. We can see that there is no universal solution to government, but a mix of powers has historically been most successful.

Regardless of these complexities, imbalance has been the endless bane of political arrangements, whatever their structure. Again, the history of the U.K. is instructive. Its parliament was, until the late 17th century, a servile creature. It was filled with ministers appointed by the monarch and weak in power since it was the monarch who had the discretion to dispense with or suspend laws, among other prerogatives.

It was only by chopping off the head of one king (Charles I) and implementing the ‘Glorious Revolution’ in the late 17th century that the monarch was properly shackled, and a meaningful democratic system and robust parliament could emerge. Even today, the structure of the executive branch remains an ongoing point of disagreement.

What has all this got to do with the current situation in Ukraine?

Ukraine is suffering the consequences of an imbalanced and over-powerful Russian executive. Democracy is not so much the issue here. Russia has a State Duma in operation; its democratic element exists and functions.

However, place an executive branch in the government run by an individual who wishes to remain in power indefinitely, and it will hound the political opposition, shut down dissent, erode government accountability and so forth.

This problem cannot be solved by having more elections or being ‘more democratic’ since the problem lies in an uncontrolled, arbitrary, and ever-expanding power of the executive, not a lack of a democratic mechanism as such.

Surely, our challenge, as a civilization, is to get better at creating balanced governments? Our destructive military capacities make it imperative that we attempt to sort out once and for all the problem of balanced government, if not in totality, at least in controlling its capacity to wage war.

We still have a special and historical problem with the rule of the one: the grasping power of autocrats, despots, and the power-hungry that has mutated from tribal elders to kings and right up to modern-day presidents over time. But it remains the same in its rapacious capacity for carnage.

In medieval times, a single deranged king or Roman consul could wreak havoc on entire populations and neighboring states at will. And we have not yet escaped this paradigm of political organization.

This stumbling block is especially challenging to overcome because it involves controlling power that humans are naturally attracted to. The obstacle is more difficult than enhancing democracy, which involves encouraging the expression of opinions, a characteristic that humans have generally never had trouble with, when given the chance.

What is to be done?

I can’t help feeling that instead of incessant cries for greater democracy in the world, we should create better international institutions for advising and assisting governments in creating balanced constitutions that shackle executive power. We need more thought on improving checks between this branch of government and the legislature and judiciary.

How is the executive branch to act with decisiveness, particularly in emergencies, yet be restrained from abusing the power of the other branches of power? How can limited terms of the executive branch be made as unassailable as possible? How can the separation between short-term executive decisions and destructive military capacities and action be made safer?

The war in Ukraine is a rallying cry to push onwards with the improvement of government – in particular, to intensify our efforts to achieve balanced government and moderated executive power.

Perhaps this situation can help us to conceive of new ways to further these ends and, in the process, advance the cause of freedom and good government.

** Charles Cockell is Professor of Astrobiology at the University of Edinburgh.

We have 754 guests and no members online